"At last... our moment has come... The Dragons will suffer for what they have done... And this world shall remember the name... Z! ~ Z, last lines of Cutscene 56

It is revealed that Rita was working under Z's orders, at least during the events of Crystal Story II. He has been planning to exact his revenge against the Elder Dragons for throwing him into the human world thinking the elders are making excuses to thrown out the "unwanted." After the heroes encounter him for the last time at the Abyss, he returns to the Dargon world and was trapped in there, presumably getting knocked out by Phoebe while in there.

Z appears in the last cutscene in Crystal Story: The Hero and The Evil Witch which it reveals he absorbed the power of the Dargon dwelling in the 25th floor of Evil Cave after it was killed by Mercenary Inc., thus earning the bones that creates out his current appearance.

Z is a dragon who is depicted as a slightly-dark skinned man with a sinister appearance consisting of black pupils and hair. He wears red robes with four set of ribs and a skull on the collar with a black sash wrapped around his waist. He had Dargon bone armor on his left shoulder, wrists, tail, and his right side of his face.

Z in the last Cutscene (Online) 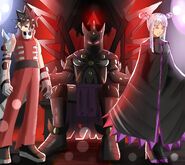 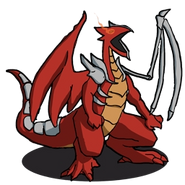 Add a photo to this gallery
Retrieved from "https://crystal-story-ii.fandom.com/wiki/Z?oldid=18951"
Community content is available under CC-BY-SA unless otherwise noted.