As the leader of Mercenary Inc., he ensures that all customers are taken care of. He is a very polite fellow, but not very smart. Things that amuse him include things that explodesic, the color red, and spaghetti.

Tristam is a young swordsman with short white hair. He wears a red sweatshirt with short orange sleeves, orange armbands, baggy pants, and sneakers. He also has a beard but if one looks closely, it's fake.

Tristam's render from Crystal Story I 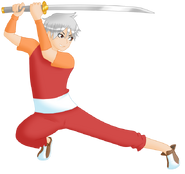 Retrieved from "https://crystal-story-ii.fandom.com/wiki/Tristam?oldid=18903"
Community content is available under CC-BY-SA unless otherwise noted.