Phoebe is a character in Crystal Story II, who was a main character in the first Crystal Story. She is a member of Mercenary Inc. She uses hammers and her element is Earth. Phoebe has a crazy obsession over hammers. She also tags along with the party during certain parts of the game and helps out in some battles.

Cheerful Phoebe really loves her hammer. She enjoys swinging it all the time and hitting things with it. Her CAPS LOCK key isn't broken, her SHIFT key is.

Phoebe has short red hair, a yellow tank top dress with a green stripe, a brown-yellow saddle bag, brown boots, and a grey hammer. Her skin is lightly tanned and her eyes are brown. Also, most of the time she is shown with a mischievous look.

Phoebe loves her hammer and enjoys swinging it around. She constantly talks loudly, and this is revealed to be because her SHIFT key is broken (breaking the fourth wall, as a keyboard is required to type her messages into the game). Whenever she gets the chance, she often comes up with wild ideas to bop someone/something on the head with her hammer. She is impulsive and excitable, and Lina seems to acknowledge that she would attack the guardian of the Orcracle after Phoebe tells the guardian that she will attack him and D questions if she really will.

When D says he needs to find the oracle, Tristam introduces him to Phoebe, who joins the party as they go through Orc Isle to find the Orcracle. She shortly abandons D when he begins his chat with the oracle.

(From mathematical testing, she seems to have 70 ATK and 75 MAG)

Phoebe has the following spells:

Later, when the party splits up in Crystalia, D is pulled over by Phoebe, because apparently "green girl" (Lina) has broken one of the Mercenary Inc. rules: You must notify Mercenary Inc. before you accept a mission. Phoebe then accounts D for Lina's crimes and forces him to help her go to Light Tower for a mission to remove Rock from the premises. Once again, she abandons D after beating Rock.

After the heroes destroyed the Dargon King, Carl was feared by the infected Orc clan at the north and alerts Pheobe. She later shows up before the battle with the Darc Initiate. After the Initiate was killed, she fetches the Orcracle about the situation. When the heroes climb to the top of Orc Tower, Phoebe and Carl tagged along and jump into the portal where Rita collect Dargon bones. However, after the Darc Master is slain, Z appears and shuts down the portal by his intentions after weakening the heroes, trapping Phoebe inside. After Z met his true defeat at the Rift, the heroes kept the portal open until Phoebe returns back to their world. Since she done most of the work by smashing all the Dargons while she was trapped inside, she get gifted tons of points by Tristam over D's alliance.

Phoebe's render from Crystal Story I 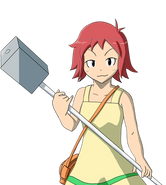 Retrieved from "https://crystal-story-ii.fandom.com/wiki/Phoebe?oldid=19254"
Community content is available under CC-BY-SA unless otherwise noted.