Malloc is a minor character in Crystal Story II. He is the guardian of the Fire Crystal. At first, he doesn't trust D and company with it, and fights them to prove their worth. Later, Orrora states that Malloc was just playing with them. 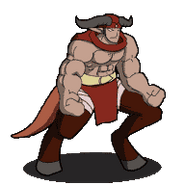 Malloc's battle sprite
Add a photo to this gallery

This article is a stub. You can help Crystal Story II Wiki by expanding it.

Retrieved from "https://crystal-story-ii.fandom.com/wiki/Malloc?oldid=17800"
Community content is available under CC-BY-SA unless otherwise noted.