"Don't get in my way." ~ Kaz, one of his introductory lines

Kaz is one of the four main characters in Crystal Story II: War of the Shattered Sky. He is the Demon prince of Necropolis and a powerful wielder of his cleaving scythe. When the main characters first encounter him, he appears to have been unconscious likely after being overthrown by Rita and Sylandra. He is so enraged after being exiled, that he goes as far as to even attack the party, but calms down later.

A dark, mysterious Demon with an unknown past. He joins the party with his own agenda in mind. Can he be trusted?

Kaz is depicted as a middle-aged lilac-skinned demon with a regal appearance. His head has dark purple hair, two horns on his forehead, pointed ears, and gray pupils. He wears a dark blue tunic and is protected with armor on his shoulders, lower arms, wrist and upper chest. A blood red cape is attached to the base of his neck by his breastplate. He wears dark gray trousers and armored boots.

Although he extremely resents forcing himself to join with D's group for the sake of vanquishing Rita and Sylandra at first, it is noticeable that he does seem to grow a bond with the party as the story progresses with him finally getting along with them near the end of the story.

Kaz uses Scythes and his starting weapon is the Deathscythe, which focuses on attack. His weapon skills are Rend, Hurricane, and Death's Gate.

Kaz is the only party member that does not join with a level I class already selected.

"Just according to the plan!" - when using a charged attack

"This world is mine!" - when using a charged attack

"Well, why don't you stop bumping into them?" - in response to D

"Keep up!" - when powering up or healing an ally

"Come on, keep up!" - when powering up or healing an ally

"I was just getting started." - after winning

"Thanks...I guess." - getting powered or healed

"I guess I should be thankful." - getting powered or healed

"Didn't really put up much of a fight." - after winning 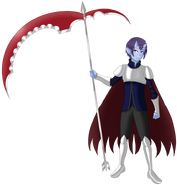 Add a photo to this gallery
Retrieved from "https://crystal-story-ii.fandom.com/wiki/Kaz?oldid=19339"
Community content is available under CC-BY-SA unless otherwise noted.