Guide is a minor character in Crystal Story II. It is a robot created by Mari. It can tell jokes and can also rename the party if you like. It appears only in the Tavern of Port Breeze.

Guide appears in Crystal Story: The Hero and The Evil Witch as a sidequest NPC. It first appears in Hidden Shrine being trapped with two chests behind a metal door. After Tristam connects the Statue Piece and frees it, it thanks him and give Tristam the Batteries, which are needed for another hidden quests.

Guide reappears in the Labyrinth of Flames to analyze the fishes the strive in the lava. It gives Tristam the Golden Fishes.

Guide's backstory may or may not retconned to be related to Mari's tinkering skills. 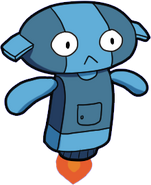 Guide as he appears in Crystal Story: The Hero and the Evil Witch
Add a photo to this gallery
Retrieved from "https://crystal-story-ii.fandom.com/wiki/Guide?oldid=18953"
Community content is available under CC-BY-SA unless otherwise noted.