Crystal Story II: War of the Shattered Sky is a role-playing flash game created by Emmanuel Salva Cruz. It uses a turn-based battle system where the player battles using 1-4 characters against a number of enemies. In the game, the player completes quests as they travel through locations, accessible through a world map, with randomly generated layouts. As the player makes their way through locations they unlock more locations and side-quests. The game follows the adventure of D, a dragon who is sent to stop the evil witch Rita from releasing the Dargons into the world. Along the way, D gains several allies including Lina, Mari, and Kaz who help him to complete his quest.

In Crystal Story II, there are six characters total that the player can use in battle throughout the game. The player always uses D in battle since he is the protagonist of the game. However, during the events of the game, several characters team up with D on his adventure and help him in battle. Three of those characters, Lina, Mari, and Kaz, stay with D throughout most of the rest of the game after they have been unlocked, while the other two characters can only be used in battles during certain parts of the story. The four main characters, D, Lina, Mari, and Kaz each have customizable class sets which are upgraded in order to unlock new skills and better stats. The other two minor playable characters, Phoebe and Reuben, have preset skills and stats that cannot be altered, as they are playable only for short periods during the events of the story.

There are no character levels in the game. This is compensated by a system of class skill trees, providing gradual but continuous improvement. Each playable character can slightly improve after a few battles. Except for the starting class of D, Lina and Mari, each character can select any Class, go though a pre-set skill tree rewarding them with Stat increases or new Skills at every step and then finally unlocking a new Class at the end of the tree. You need Skill Points (SP), the equivalent of experience points, to buy the next improvement. You can select between two improvement choices at every "grey node" of a skill tree (i.e., 5 times per tree). Any combination of Classes is possible, but first your first two trees will be Class level I, then two Class level II, etc. When selecting a higher level Class, having the lower levels of the same Class is no prerequisite (i.e., you can have Slayer I - Healer I - Guardian II - Healer II - Elementalist III - etc., if that is what you like). 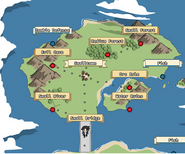 A section of the World Map 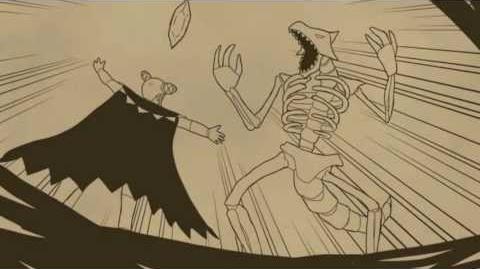 Crystal Story 2's plot may take some inspiration from the game, Final Fantasy: Mystic Quest. The plot there involve retriving four crystals: Fire, Earth, Water and Wind, which are the same elements the crystals are in Crystal Story 2. Both plots involve using the crystals to destroy a greater force of evil. This is further evidence with CSI heroes' names being taken from the allies of that installment

Retrieved from "https://crystal-story-ii.fandom.com/wiki/Crystal_Story_II:_War_of_the_Shattered_Sky?oldid=18503"
Community content is available under CC-BY-SA unless otherwise noted.