Carl is a minor character in Crystal Story II.

He is initially serves as the first test for D and Lina in order to see the Orcracle and as the Orc Phoebe tries to smash. He reappears in Chapter 6 after getting distressed from getting deadly Dargon signals of the Orc clan at the North Orc Village. While checking out what's happening, he was upset about seeing one of his Orc allies being corrupted to a Dargon Hybrid. When the heroes climbed to the top of Orc Tower, he and Phoebe jumped into the portal where the source of Dargon bones are being collected to destroy them all. However, he got brutally damaged by Z after calling foul on him for trapping Phoebe in the portal.

He and Phoebe later reappeared in a cutscene that will lead to their own journey in the next installment after the heroes defeated Seraph.

Carl's in-battle sprite
Add a photo to this gallery 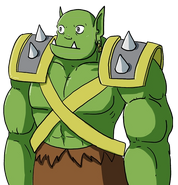 Add a photo to this gallery
Retrieved from "https://crystal-story-ii.fandom.com/wiki/Carl?oldid=18448"
Community content is available under CC-BY-SA unless otherwise noted.